Signs That Your Car Battery Is About To Die 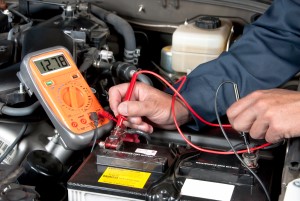 As most vehicle owners are aware, a dead battery can occur at almost any time, and anytime it does, it can be a massive headache. While there are times when your battery can die with little-to-no warning, oftentimes, there are going to be signs you can be on the lookout for that might indicate your battery's health is in a declining state before it winds up stranding you in a strange parking lot, on the roadside, or in your driveway when you're already running late to work. To help you better identify a few of those signs so you can avoid the headache that comes with a dead battery and avoid becoming stranded, our team of Albany towing professionals have taken the time to put together this short list for your reading pleasure.

It can be easy to get lost in the plethora of warning lights contained in your dashboard, but believe it or not, there is a warning light that indicates when your battery power is weak. In newer cars, this is often indicated with a battery symbol, and if this light comes on when you're driving, or stays on after starting your car up, it's important that you don't turn your car off. The same rule applies if your battery warning light doesn't come on, but your car still feels a bit slow on starting up. Your alternator will help to charge your battery while you're driving, which is why you aren't going to want to turn it off until you reach your destination.

A battery that is near-dead or dying is going to have a harder time starting up your car which will often result in noticeably longer start times when you go to crank it up. If your car is making odd noises when you start it up, or it seems to be taking longer than usual to start up and get going, it could be sign that your battery is on its way out.

Every so often, it's a good idea to pop the hood and take a look at the state of everything inside. Most modern batteries are relatively maintenance free, but corrosion around the posts can sometimes indicate a leaking battery. If you notice that the poles of your battery have a great deal of corrosion, the best thing to do is to clean them off carefully as this can lead to difficulty starting your car up. If the corrosion keeps coming back, your best bet is likely going to be to find a battery replacement before you wind up stuck on the side of the road waiting for road side assistance.

What People Have To Say

Life Savers! Mr Kennedy helped me get rid of my old car that was leaking fluid over my entire driveway not only did he remove it but offered to help me clean up my driveway. Cant thank him enough. [...]

Fantastic Service Not only did they pay me a fair price they got rid of my old clunker promptly. [...]

How To Choose The Best Junk Car Removal Company

If you have a non-working car or a vehicle you've been using, that has reached a point where it's more expensive to fix than it's worth. It may be time to sell it. The question is, how do you find th […]

Benefits Of Selling Your Car To A Junk Car Removal Company

There are several drawbacks to selling your non-working car to a junkyard. The main one is that you may not get the amount of cash you expected. After evaluating your vehicle, a junk car removal serv […]

Looking For An Albany Junkyard & Auto Salvage? Look No Further!

Call Us Today Or Fill Out Our Online Form